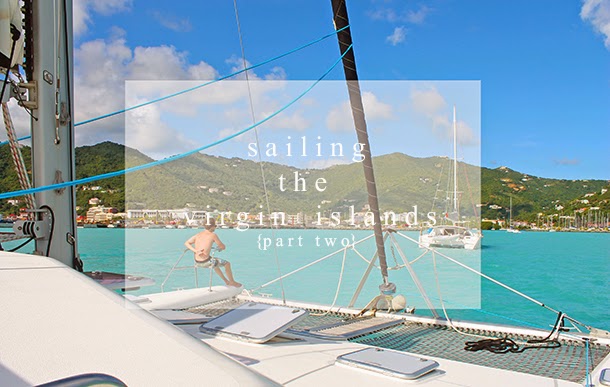 {part two of three}
For those of you who’ve been following along, Dan and I went on an awesome sailing trip in the Virgin Islands a few weeks ago. Here is part two of the three-part journal post that I’m working on. If you’re just joining in now and want to catch up, here is the previous post. I should have put this video in part one, but I just discovered iMovie last week! So here are a few clips of the trip!
Day Four
We sailed from Anegada back to a dive spot called Blonde Rock, a set of two pinnacles between Dead Chest and Salt Island. D and I snorkeled today and swam through thousands of tiny baby jellyfish . Ouch. They felt like little needles and left dime-sized red blotches on our skin. Thank the lord their bigger and more painful mamma wasn’t around. After our morning snorkel we sailed to Virgin Gorda and explored the famous Baths – giant boulders with a menagerie of  tiny waterways and sea caves with crystal clear water. We squeezed though cracks and jumped off rocks. This place is a sight to see! Picture perfect.We spent the night anchored off Cooper Island  – cooking, drinking wine, swinging in the hammock and worrying/getting amped for the RMS Rhone dive in the morning. I must have asked a million and one questions that night. It was only our (mine and D’s) second dive and 85 ft deep. “What if this happens….what if that happens?” Did you know you can barf under water and put your regulator back in? Who knew? Don’t worry, I didn’t… but I had to ask. I’m a planner. 😉
-my babe and a morning stretch- 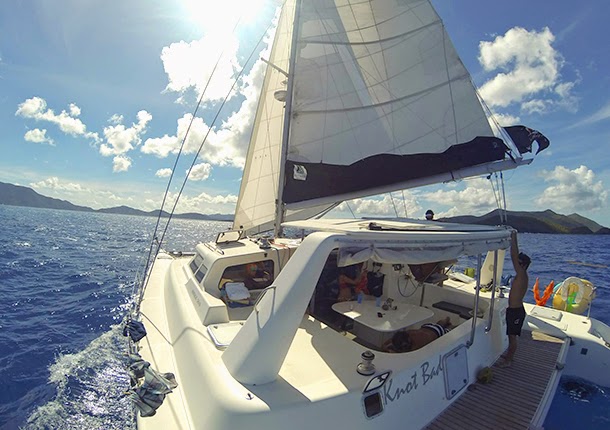 -blonde rock and rhone dive on the map- 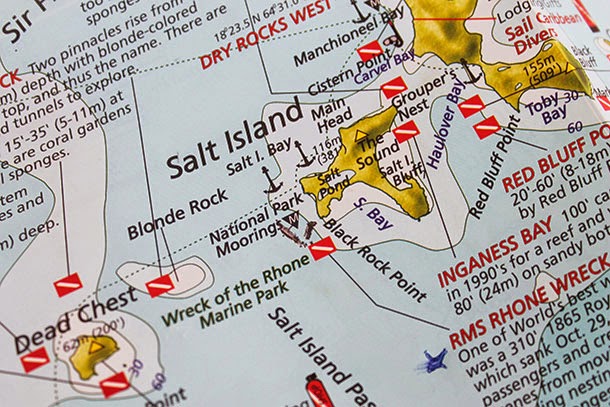 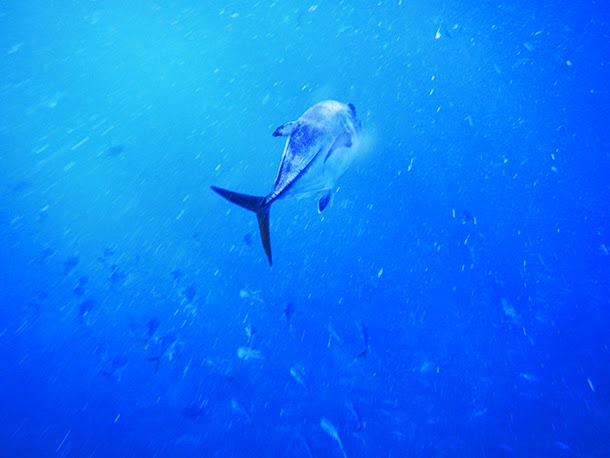 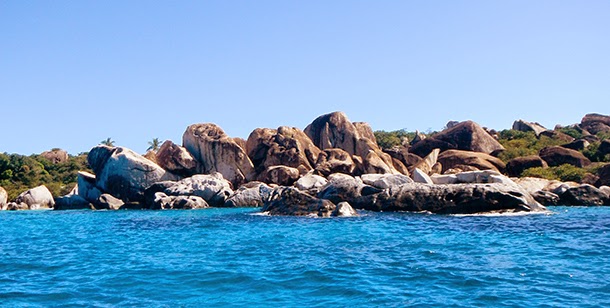 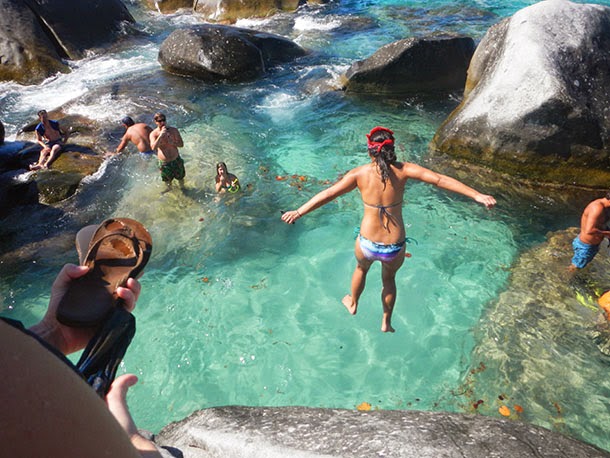 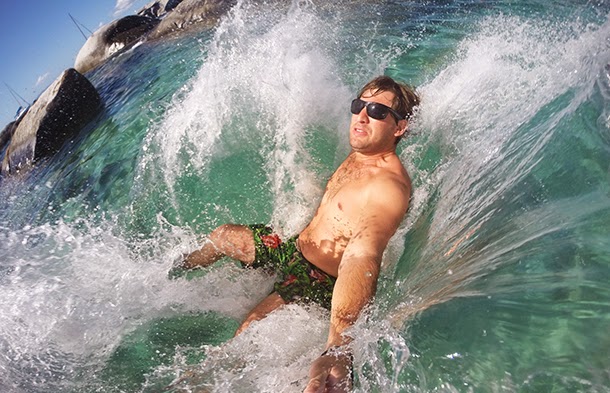 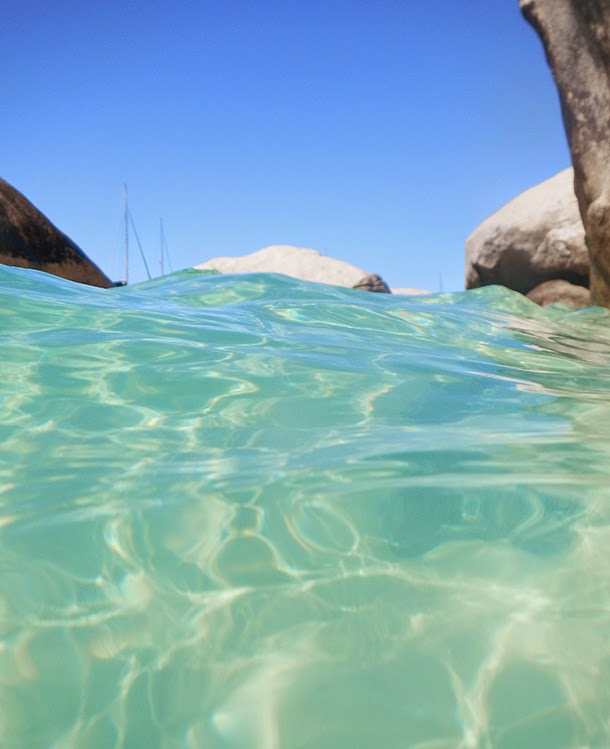 Day Five
I woke up early this morning and made French toast with cream of coconut syrup, mangos, pinneapples and oranges for the crew. Mmmm I didn’t eat a lot though…I was already jittery and nervous for the dive + didn’t want my question from the night before to come true. barf.
We sailed a short distance to Salt Island and got ready for the RMS Rhone Dive. Cole and I dove first! I asked him to teach me how to do an emergency backup regulator switch just incase something went wrong. I wanted to know that I could make the switch without messing up (my motto: prepare for the worst and hope for the best. Right? D says I worry too much…I call it being smart). Thumbs up. I did ok. We eventually descended the 85 ft to the ocean floor with a few helpful foot pulls from Cole.
Wow my mind was blown!The huge RMS Rhone Ship lay on her side right before us! It was an eerie feeling being up close to such a devastating wreck and touching something that has been underwater for almost 150 years.
The RMS Rhone was a Royal Mail Ship that carried mail, passengers and cargo between England and the Caribbean. In October if 1867 a major hurricane hit the Virgin Islands. The “unsinkable”Rhone; planned to make for open sea. As a safety precaution the passengers in Rhone were tied to their beds to prevent them from being injured in the storm. The Rhone struggled to get free as her anchor caught on a coral reef. It in now lies with its chain wrapped around the same coral it caught on a century and a half ago. The ship sank swiftly — the bow section in 85 feet of water, the stern in 30 feet. 123+ people went down with the ship that night.
Our dive went perfectly, besides my lack of divers sign language (apparently thumbs up means I want to go up…should have done the OK sign instead. Oops). I wish it was longer, but I’d imagine that’s the same with every dive. It was one of the coolest things I’ve ever seen! So grateful to have friends that made it possible for us!
After my dive I got to watch Danny descend (with my heart) for his dive. Oh gosh I can’t take knowing he’s at the bottom of the ocean.  He’d actually be far better off surviving an underwater situation than I would. But still, I can’t watch him do scary things. Good news, everything went well with his dive too. Thanks for taking care of my baby, Jeff!

That afternoon we anchored at Peter Island and found coconuts on shore and I got a chance to climb the mast. The views were amazing and the picture I took was even reposted on Goops Insta by Gwyeneth Paltrow! What? Yes!How did that happen? 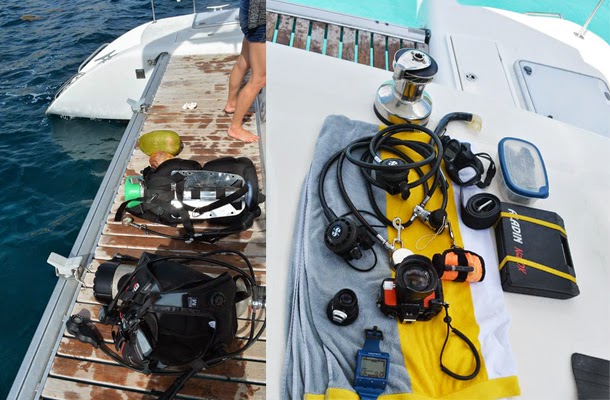 {cheesing it up under the sea} 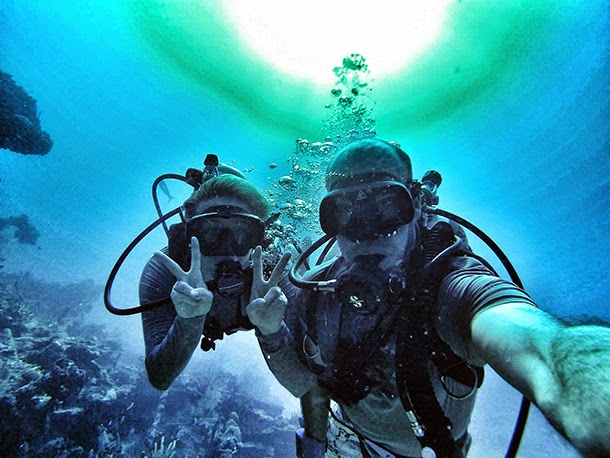 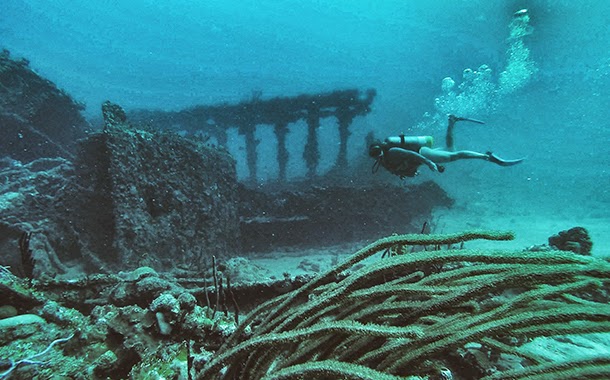 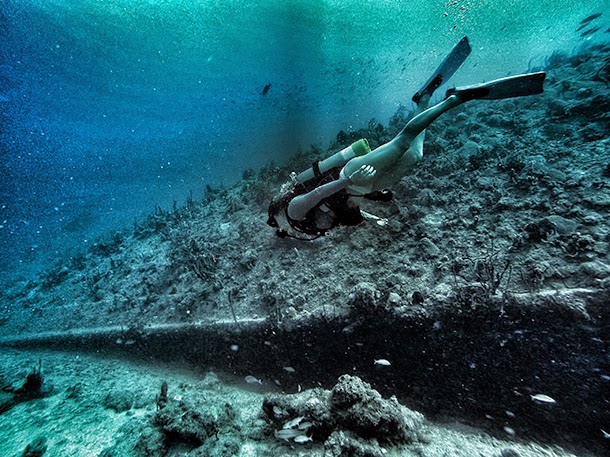 -this picture makes me feel like a badass…but i’m actually trying not to hyperventilate ;)- 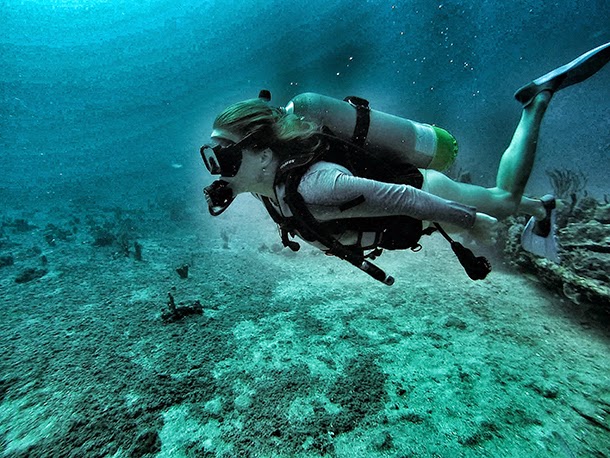 -drink of choice and climbing a mast- 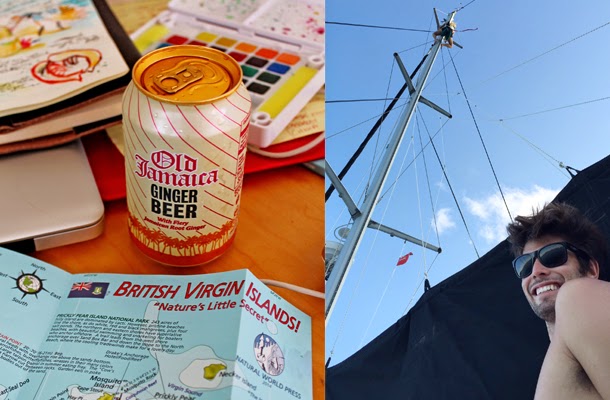 -playing peter pan on peter island and the picture that ms. gwyneth palrow reposted. can we be best friends please?- 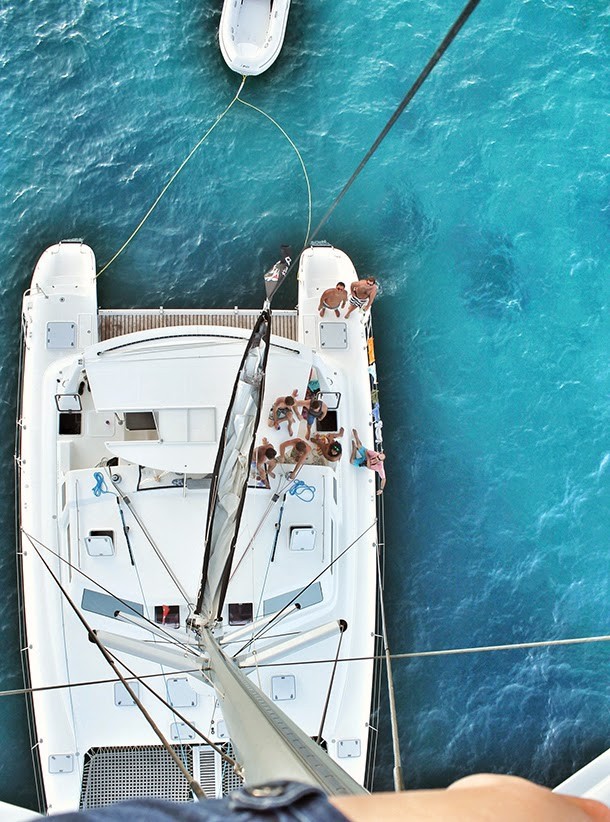 -ladies and gentlemen, i give you peter island-
-fun fact: when bill gates stays here he pays extra for planes to change their flight pattern so they don’t fly over the island and disturb his relaxation…crazy- 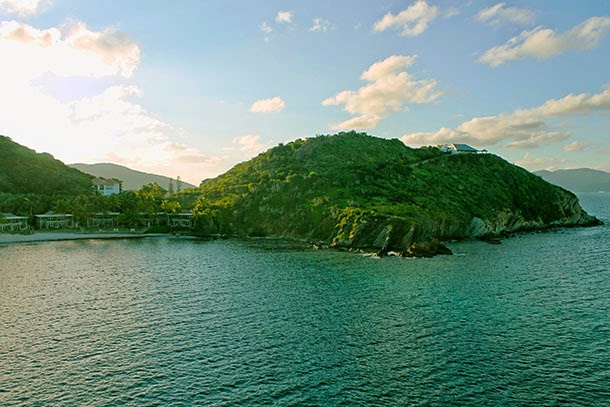 Day Six
Woke up and the boys had already set sail to Brown Pants…yes that’s right Brown Pants. A dive spot known for it’s cool under water arches and BULL SHARKS. Hence the name. I opted to stay on the boat and open coconuts while the majority snorkeld and dove. Poor Ryan suffered “Mask Suck” or sinus problems that led to some uncomfortable swollen eyes after his dive. Miss Mon our personal Nurse cured him with an ice pack. Phewf.
That night we moored off Norman Island (AKA Treasure Island) in Privateer Bay around the corner from Willy T’s in The Bight Bay. We heard there had been theft in Bight Bay so we decided to moore a little further away and take the dinghy to Willy’s that night.
Oh Willy T’s…you were hilarious, fun and disgusting. Our first shotski.
Motoring back to the boat that night was magical…in a tipsy blissful state, surrounded by my love and friends in the black of night and the warm water glowing with bioluminescents in the wake of our dinghy. Ahhh a night to go down in history. 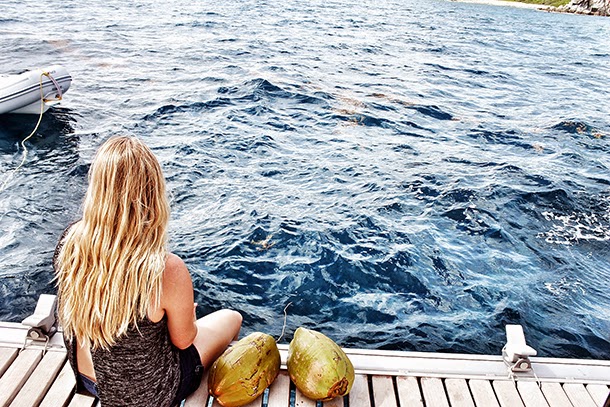 -this took me an hour- 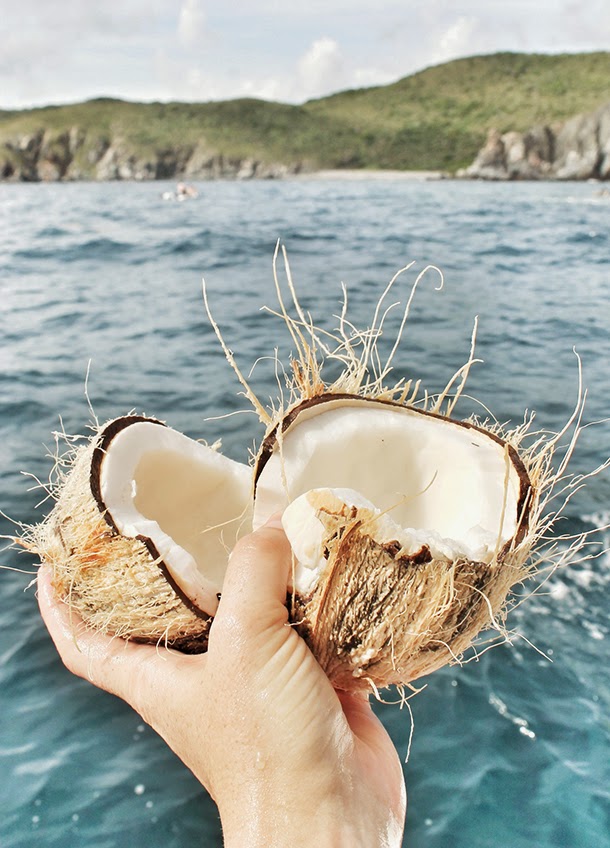 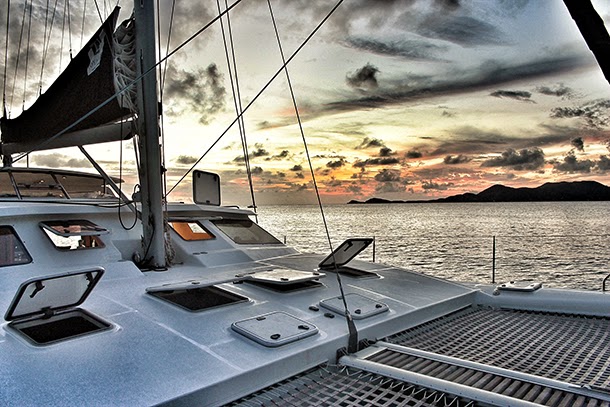 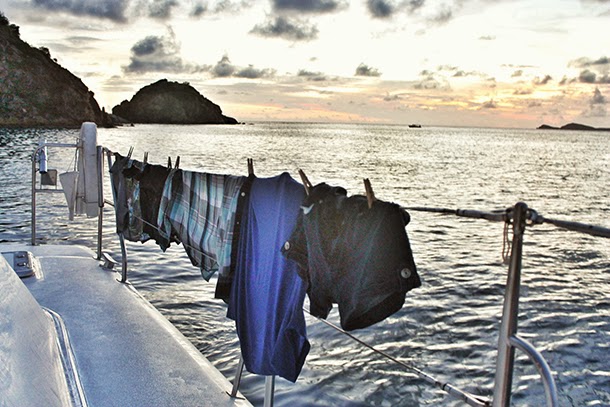 -exploring the shore for me treasuuuuuure- 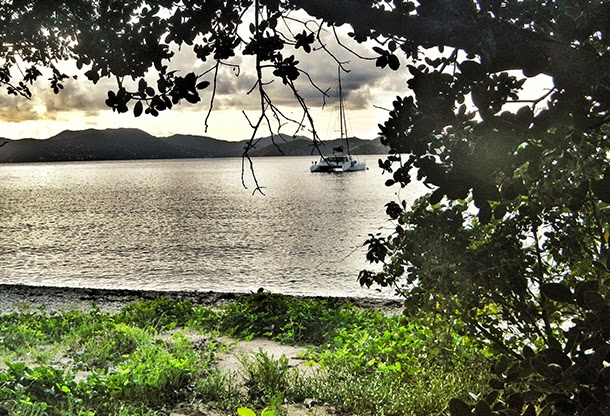 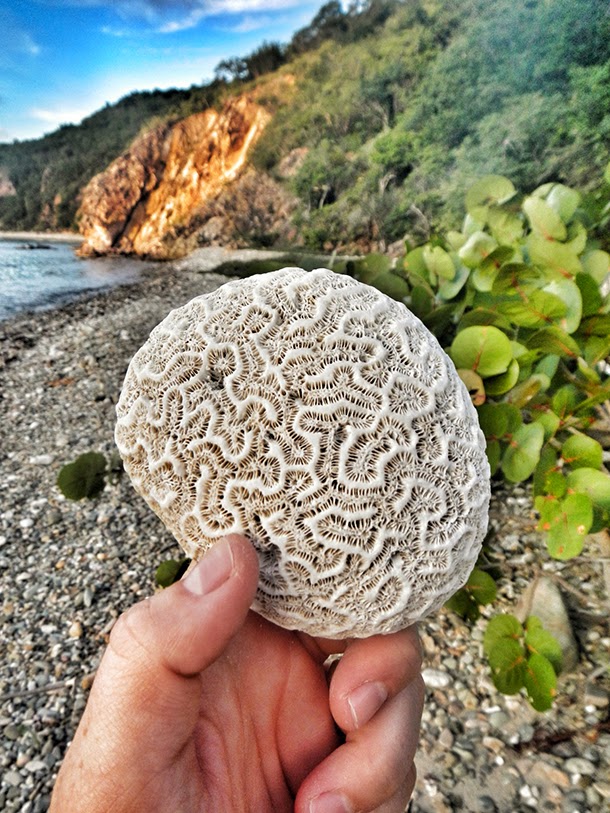 -snorkeling the caves on norman island- 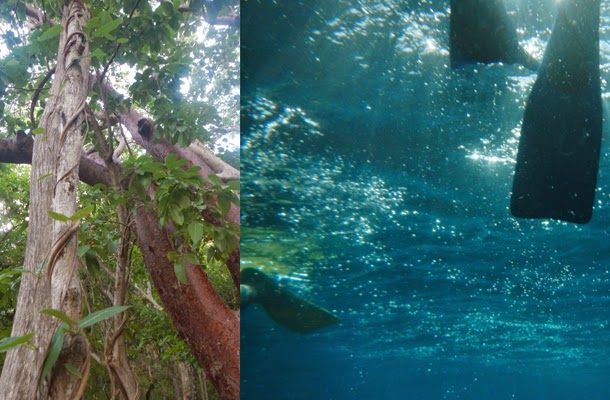 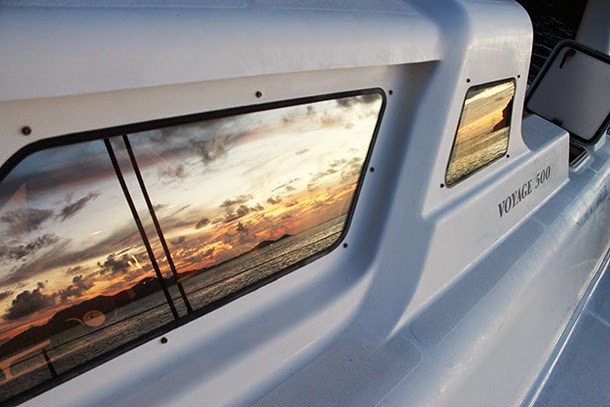 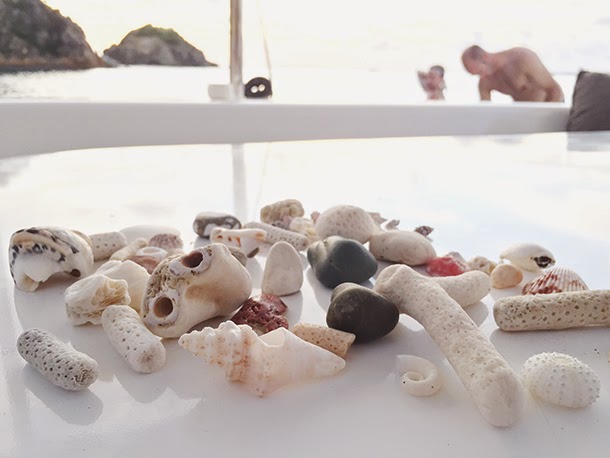 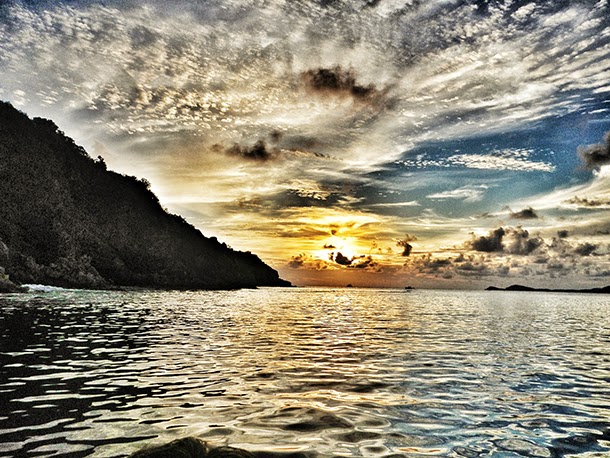 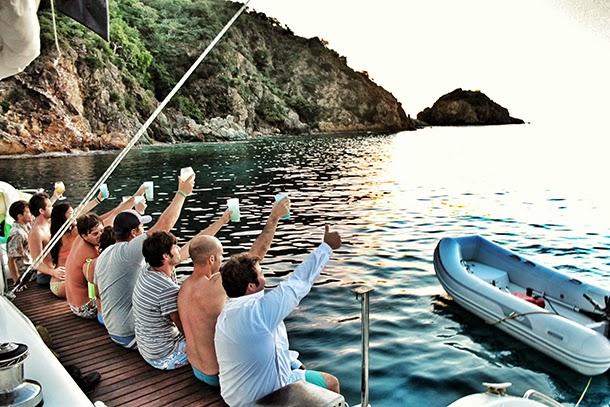